This time last year I was a toader! I was deep in mud in the Oxfordshire countryside preparing for the arrival of some very special little creatures.

Each year as Spring starts to bring warmer temperatures amphibians are drawn out of hibernation to begin the epic journey to the place of their birth, to start the life cycle all over again. Unfortunately, for many amphibians, this brings them face to face with danger, as they attempt to negotiate the heavily trafficked roads that have been built across the routes back their breeding ponds.

Thousands of common toads, as well as many frogs and newts are killed each year on Europe’s roads – the scene of devastation is horrific and damaging to their populations. In Europe, common toads have the highest rate of mortality from roadkill among amphibians. And whilst the species is still common and widespread, they have been listed as a priority species under the UK Biodiversity Action Plan, as result of their decline in numbers.

Across the UK toaders may be rescuing as much as 40% of the of the total toad population each year!

I was fortunate to be part of one of the biggest toad migrations in the UK, with the Henley Wildlife Group Toad Patrol. Each year between 4,000 – 10,000 toads are helped to cross the busy main road from Henley-on-Thames to Marlow (40 miles west of London).

Back in the late 80‘s a toad tunnel was constructed under the road but alas the toads didn’t particularly take to this narrow dark noisy tunnel much preferring to launch themselves across the road kamikaze style.

So in stepped Toad Patrol. 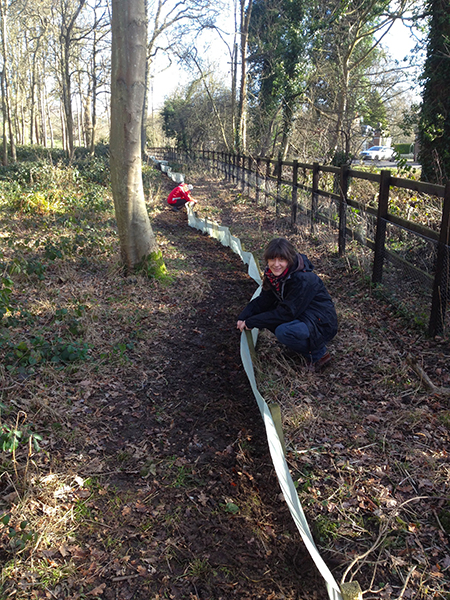 In January the preparations for the February/March exodus begin with the construction of a make-shift barrier to temporarily hold back these determined travellers. And as soon as the first mild damp night arrives the toaders are out in force, to collect the toads and frogs that have gathered at the barrier and carry them across the road in their thousands to their breeding ponds.

Armed with 3 buckets – 1 for single toads, 1 for pairs and 1 for frogs (preferably with a lid), we headed out on toad patrol. Carrying the frogs was brilliant because occasionally the bucket would go very light as the frogs leapt from one side of the bucket to the other. Do you know that toads sing? Well, it’s more of a chirp/squeak, but it’s a lovely noise. We patrolled the toad barrier for several nights and in one particularly successful evening Jonnie and I carried 94 toads and 1 frog across the road! 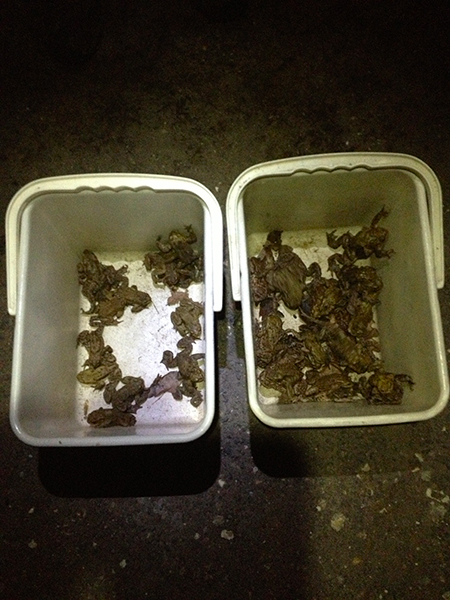 Frogs and in particular toads don’t tend to feature too highly in people’s thoughts as animals that need conserving but apart from the fact that they are fabulous little creatures, they form an important part of the ecosystem (tadpoles keep ponds and rivers clean by feeding on algae, adults keep insect populations down and are in turn food for other animals).

This is grass roots conservation where small groups of local volunteers all across the country are making a huge impact on the survival of a species.

This year my grass roots conservation effort will be penguins! More on that in another post.